skip to main | skip to sidebar

Was that a vacation??? 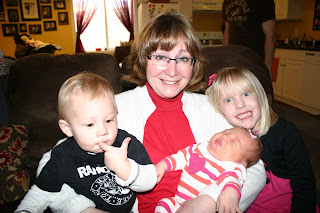 OK so Paige, Owen and I drove to Rexburg with Jody to see Adelyn 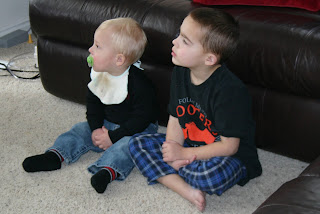 , Jordan and Abbies new and first baby. She is sooooooo cute!!! She's making a poo face in the picture though she's much cuter in person. We got in Saturday night and went straight to the hospital to see Adelyn after that we went to Mel's. We walk in and Nash was lying on the couch sick and pathetic looking. That's when it all started. The next day Melanie came down with bronchitis then mya came down with something. While Tyson was at work I was taking care of those 3 and cleaning the house. Melanie planned to get sick just so I could help and do the cleaning. Sure enough I was right. Melanie asked if I could stay another week?!!!" Well so my kids just played by themselves for a few days until they got better. They finally did. So Mel and I decided now that the kids are fine we can get out so we went to play bunko with some of her friends. We left the kids with Tyson, ALL the kids. I called Jody to see if she can come over to put Owen down for bed (she was staying at Jordan's which was just around the block)and it was a good thing I had her come cuz he threw up in his bed and Paige wasn't feeling so hot. So now Nash and Mya were fine and my kids we sick. They finally all got better and had 2 days out of 7 days to play with each other. At least they got 2 days. Melanie got a house cleaner for 7 days!!!
OK so another reason I was really excited to go to Rexburg, yes you heard right I was excited to go to Rexburg but only for the people, anyways Melanie has a friend Nichela who cuts hair REALLY cheap and REALLY good. So I had Melanie call her and set up a day and time Jody, Paige and I could get our hair done. We planned it for either Wednesday or Thursday. So I was like that will be perfect, cuz we're leaving Saturday. So Wednesday and Thursday rolled around and we didn't hear from Nichela. Mel kept calling and calling, finally shes calls and said she couldn't do it. I was a little annoyed so then we planned for Friday. Again she cancels!!! I was really annoyed. We really wanted to get our hair done so we called her again and asked if we can do it Saturday and we would just leave Sunday instead. So I wasn't annoyed as much anymore cuz I was finally going to get my hair done! Well we got a call from her and she said she can't do it she has to give a talk on Sunday. I was like no Melanie you get her one the phone now I want to talk to her. I was sooooooo mad. I called her up and I asked her if we could just come really early and I told her in the nicest way I could at that point, that we stayed an extra day just so she could do our hair!!! and she goes I know I just feel like I need to prepare for it better. Well you had all week and you new we were coming from out of town and leaving Saturday. I wanted to say that to her but I was trying to be nice so I didn't. So I asked her for someone else that we could go to she gave me a number and it ended up being the wrong number! I was furious. We tried calling her back to get the right number but she never answered. It still makes me so mad just to think about it. It was so inconsiderate of her. She knew we stayed another day just so she could cut our hair! Anyone with common courtesy would do it. That's just plain rude!!! The next day I just went to a local salon and got Paige's hair and my caterpillars done, aka my eye brows! This girl did a horrible job. So that made me even more mad, paying for a crappy hair cut when I knew it could have been better and cheaper, and my caterpillars, there still there, just a little thinner! So anyways that day I was just mad. So we planned on leaving Sunday now. Well Jody ended up going into the ER that night so we had to wait until Monday to drive back! Jody's fine I can't tell you why she went to the ER, she promised me not to tell and out of COMMON COURTESY I won't. But it was pretty funny. That made my whole weekend! After all that I'm glad we went. We got to see Andy, Mel, Ty and the kids and also Jordan, Abbie and Adleyn.
Well we got home Monday and yet again I had to take care of sick people. Owen threw up again and Riley came home Early from school with a 101 temp. When will it end??? And I still need my hair done!!!